AI vs Paradox of Choice

The paradox of choice is a problem we see more and more of in our modern world. It goes beyond what products Amazon should recommend or friends Facebook should suggest. In the business world and in enterprise applications this is also a challenging problem as our applications and processes grow in complexity. The potential for machine learning powered recommender systems to augment human decision making is one of the next frontier for AI in the enterprise .

Recommender systems can do more than just suggest what articles you should read on Linkedin or what jobs are most suited for you. In the future machine learning (and more likely deep learning) powered recommender systems will guide enterprise decision making by helping business process owners take the most effective actions and decisions in a timely manner and with hyper-personalization. And as with all ecosystems, once you introduce a new input variable (such as in this case a personalization/recommender system itself), this will affect future human or system behavior that you are personalizing today - it is a moving target.

Recommender systems will move from solving B2C optimization problems (how they are typically used today in our data saturated and over marketed world) to solving problems in B2B and enterprise applications. Ultimately recommender systems are about prescribing (they are not really about predicting) an optimal decision at the right time and place/context, so they can naturally deal with a variety of B2B scenarios such as optimizing workflow paths, streamlining supply chain actions, to augmenting human decisions for common day to day business operational functions. Enterprise decision makers are in vital need of these AI super powers. Stay tuned they are coming :)
Posted by Sam Taha at 6:29 AM No comments: 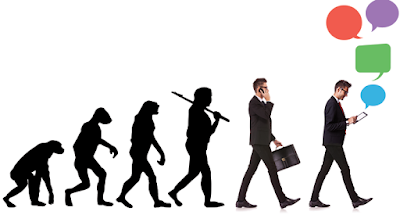 Conversational UX design is evolving as more and more apps begin to incorporate conversational UI functionality. While the concept of a messaging-centric UI can seem simple, the melding of a messaging-first user experience is nothing to underestimate. Conversational user interfaces can be simple for humans to interact with (you are just chatting back and forth), however, blending in and balancing rich visualization and complex interactions is not simple to get right. Just like any other UX, it is a balance of minimalism while allowing for rich expressiveness in the UI without overwhelming the user.

Slack is one of the leading platforms for building bots, especially for enterprise applications. However Slack has a number of bot conversational UX features that are still missing relative to other platforms such as FB Messenger and FB Workplace.

To give some perspective, here is my compiled list of features I would like to see in Slack's bot framework to improve its messaging UX and bring it on par with platforms like FB Messenger:

Slack bots (especially in direct-messaging one-on-one dialog flows) force the bot and the user to both be left justified in the messaging UI stream. This goes against UI norms found in the majority of messaging application and related best practices for messaging apps. Typically in a streaming messaging flow, your conversational stream (you being the person interacting with the bot) is on the right of the screen and the party you are talking to (in this case the bot) is on the left side of the screen (or it can be visa-versa).

This is something not supported in Slack and makes a number of things awkward and cluttered in a bot-to-human dialog, especially when it is one-on-one (as opposed to Slack group channel). In Slack the entire conversational interaction is left justified, which can make the UI look cluttered when there are visual rich elements involved and and things like "Quick Replies" in the back and forth stream.

I hope that Slack will allow for aligning the bot vs the user on different sides of the messaging stream, something more similar to how FB Messenger works. This will allow for a more natural conversational interaction.

Slack does not have explicit support for messaging buttons that open a webview UI. Sometimes a webview is needed to show rich web content (again here this kind of feature should not be abused). FB Messenger has this ability and allows for controlling how the webview window is opened and closed. This can be mimicked in Slack by using embedding links in the "field" elements for example, but is a bit of a hack.

One particularly nice feature I got accustomed to using in Facebook Messenger is the feature referred to as "Quick Reply". This allows the bot to display "Quick Reply" buttons that are shortcuts for the user to enter commands that they would normally have to type.

There is a away to mimic quick replies in Slack, but again it is a bit of hack. Check this open source node/slack project for an example of how this works with Slack. Quick replies are a real necessity in a rich messaging interaction. Again here, I hope that Slack adds this feature natively instead of making bot frameworks jump through hoops to emulate this feature.

Hopefully the Slack product team will address these issues as Slack is by far the best team and enterprise collaboration/messaging platform on the market today.

FB Messenger might have some superior bot-to-human interaction and UX capabilities, but it inherently lacks the team collaboration functionality and the many third-party integrations that Slack has to offer.

I do believe FB Workplace will close the gap over time, and in many ways has advantages over Slack in terms of out of the box social collaboration functionality. Slack is a bit of geeky technical tool when it comes to social collaboration and thus not as intuitive to use.

I expect both FB Workplace and Slack to evolve as head to head competitors and battle for the hearts and minds of developers much like how Netscape battled Microsoft's Internet Explorer for web domination. For enterprise owners and enterprise end user, intelligent AI endowed virtual assistants and bots will usher in a new era of innovation not seen since the dot-com days. The battle has moved from the mobile app store to the AI app store where natural language understanding and deep learning are the killer technologies in the arsenal of AI sophisticated developers.
Posted by Sam Taha at 6:29 PM No comments: